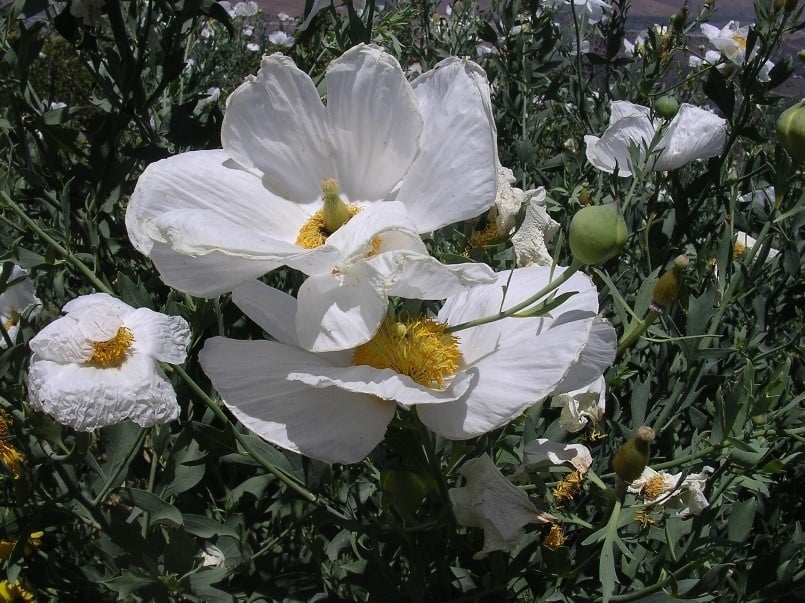 The California Poppy is one of our most beloved flowers, but another bloom within the poppy family also needs some love. Named after Irish botanist Thomas Coulter, the Coulter’s Matilija Poppy (Romneya coulteri) was nominated as the California State Flower in 1890 but lost by a landslide to the California Poppy – receiving only three votes.

The Coulter’s Matilija Poppy has showy flowers with the largest petals and buds of any native species in California. Its petals are crinkled and white and range from 6 to 8 inches across. Its large yellow center has dark brown seeds. It is sometimes called the “fried egg flower.”

This poppy is often seen in the eastern slope and foothills of the Santa Ana Mountains in Riverside, Los Angeles, Orange, and San Diego counties. In western Riverside County, the flower has been observed in Leach Canyon and Dickey Canyon near Lake Elsinore, Wardlow Canyon and Hagador Canyon west of Corona, Temescal Canyon, the Gavilan Plateau, and near Pechanga, southeast of Temecula.

The flower blooms from May to July and often lives in burned areas among Coastal Sage Scrub and Chaparral habitats. Through the MSHCP, at least 70,650 acres of suitable land will be conserved in 30 localities, where the flower has been spotted. The Coulter’s Matilija Poppy is threatened by urbanization, agricultural conversation, and other factors.